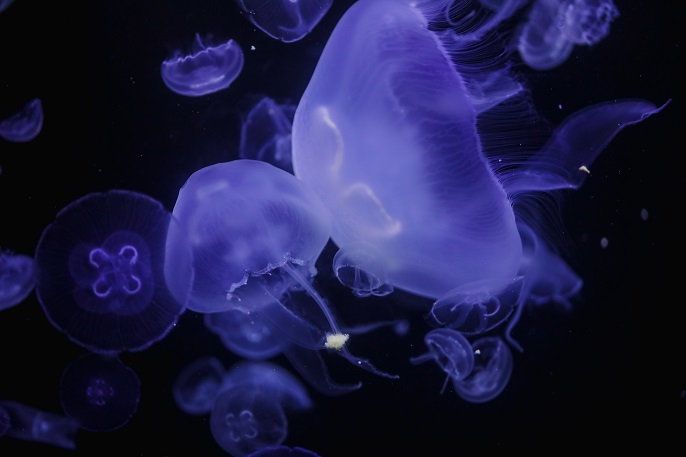 Jellyfish are an ancient and successful group of animals. An in-depth look at the genome of the moon jelly, Aurelia aurita, shows that it uses a common set of genes to transition between polyp and swimming life stages.

Jellyfish undergo an amazing metamorphosis, from tiny polyps growing on the seafloor to swimming medusae with stinging tentacles.

This shape-shifting has served them well, shepherding jellyfish through more than 500 million years of mass extinctions on Earth.

“Whatever they’re doing has really worked for them,” said David Gold, an assistant professor of paleobiology in the UC Davis College of Letters and Science.

The first in-depth look at the genome of a jellyfish — the moon jelly Aurelia aurita — reveals the origins of this successful survival strategy. The Aurelia genome, published online Dec. 3 in the journal Nature Ecology and Evolution and co-led by scientists at the University of California San Diego, indicates early jellyfish recycled existing genes to morph from polyp to medusa. The results suggest animals can radiate into new niches and forms fairly easily.

The research team was led equally by Gold, who performed much of the work as a postdoctoral fellow at the California Institute of Technology, and by Takeo Katsuki, a former project scientist at the Kavli Institute for Brain and Mind at UC San Diego and currently an application specialist at Thorlabs Japan Inc.

“Jellyfish are important both evolutionarily and environmentally, so having their genome sequence establishes their study as a key addition to what we know about their biology,” said Ralph Greenspan, a professor in the UC San Diego Division of Biological Sciences’ Section of Neurobiology and associate director of the Kavli Institute for Brain and Mind, who also led the study.

The genome: a multi-use tool

Jellyfish come from one of the oldest branches on the animal family tree, the phylum Cnidaria, which includes corals and anemones. Jellyfish were probably the first muscle-powered swimmers in the open ocean. They appeared in the late Precambrian Era, a period of major geologic and ecological changes that preceded the Cambrian explosion of animal life.

At some point in their evolution, jellyfish gained the ability to transition from a stationary polyp to a swimming medusa. The transition involves major changes in the jellyfish nervous system, muscles and weaponry, aka the stinging cells called cnidocytes. To accomplish this, the medusa life stage often co-opts existing developmental gene networks and cell types present in polyps, the researchers found. In addition, Aurelia appears to pattern its different life stages using many of the same genes found in animals such as fruit flies and humans, the study reports (all of these animals share a common ancestor, albeit an ancient one).

There is a second, more controversial explanation for what the scientists found in the jellyfish genome. Perhaps the similarities between the moon jellyfish genome and “higher” animals demonstrates that the Cnidaria originally had a medusa life stage, which animals like corals and sea anemones lost.

“Our results can’t distinguish between these two scenarios,” said Gold. If the second hypothesis turns out to be correct, “Swimming, carnivorous animals may be even older than we think.”

In addition to questions of evolution, the Aurelia genome will prove valuable in many other areas of biology, Gold said. Aurelia is an important model for studying the development and function of nervous systems, and can offer insights into animal wound healing and regeneration. Moon jellies are also a major culprit in environmentally and economically damaging jellyfish blooms, which are becoming more common. For example, giant swarms of moon jellies have clogged water-intake pipes, forcing the shutdown of nuclear plants in Florida and Sweden. An improved understanding of Aurelia genetics could offer new ideas for controlling the blooms.

“In many ways, the ancient oceans in the late Precambrian are very much like what the modern oceans will look like in the near future,” Gold said “meaning studying how jellyfish evolved in the past can tell us about their potential impact on the future.”

Funding was provided by the National Institutes of Health, a Cordes Postdoctoral Fellowship at Caltech, the W.M. Keck Foundation, the Gordon and Betty Moore Foundation, a fellowship from the Uehara Memorial Foundation, and the NASA Astrobiology Institute.