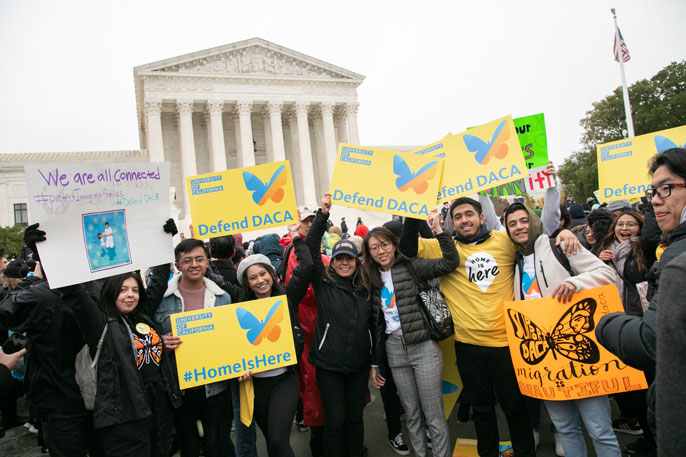 Students from across the country rally in front of the Supreme Court on Tuesday, Nov. 12, 2019, in anticipation of oral arguments in Department of Homeland Security, et al. v. Regents of the University of California, et al.

As the Supreme Court met today (Nov. 12) to decide the fate of roughly 700,000 undocumented young people who were brought to the U.S. as children, UC students stood outside, braving the wind and the rain to send a message of support.

Wearing butterfly pins to symbolize immigration and holding bright yellow signs that said “Home is Here,” more than 50 UC students joined in a rally in defense of Deferred Action for Childhood Arrivals (DACA). The program has allowed young people who were brought to the U.S. as children to live, work and study in the U.S. for a renewable, two-year period, so long as they meet a variety of strict criteria.

The Trump administration has moved to end the program, an effort that has been challenged by the University of California and other plaintiffs, who assert the administration acted unlawfully.

UC President Janet Napolitano signed the directive that created DACA when she served as the secretary of Homeland Security during the Obama administration. The Regents of the University of California were among the first entities to take legal action to stop efforts to rescind it.

Today, the justices heard oral arguments in the case. At issue is whether the Trump administration followed legally required procedures and offered a valid justification for ending the program or, as UC and other plaintiffs assert, it acted in a manner that was arbitrary and capricious. The court is expected to issue a decision before its current term ends in June.

“America is a beacon of justice and opportunity and today we stood up for the young immigrants who seek both,” UC President Janet Napolitano said following the court hearing.

“Our suit demands that the Trump administration abide by the law and abandon its attempts to upend the lives of young people who have been living with uncertainty and fear in the country they call home. This case is not just a matter of what is legal — it is about what is right.”

For many of the UC students who gathered to demonstrate at the court, the issue is not only political but personal. Some 1,700 UC students, as well as many UC alumni and staff, rely on the program for their lives and livelihoods.

Many students — some of whom are studying at UC’s Washington center (UCDC) this term and others who traveled specifically to rally outside the Supreme Court — said they came out to support their classmates and roommates who face the prospect of losing the ability to get financial aid, pursue their livelihoods, pay back their student loans and even stay in the only country they know as home.

“Two of my best friends in the world have DACA. They have a right not only to pursue their dreams but to live free of fear of deportation,” said UCLA law student Katie Aragon. She set aside her studies and flew from California to Washington, D.C., in order to stand up for her friends, whose own status put them at risk should they come forward.

“DACA recipients are our families, our neighbors, our classmates, our teachers. They are integrated into our communities. This is their home, and they are right where they belong,” Aragon said.

“Why make such a harsh, cruel, mean decision, to take people who’ve got jobs, they’ve served in the armed forces, to rip them out of that and send them back to a country they don’t know and where they may not speak the language? They don’t want to explain that to the American people.”
– Ted Olson, representing DACA plantiffs in the Supreme Court

Some students, like UC Riverside student Vanessa Vasquez, had waited outside the Supreme Court for days to gain a coveted slot in the gallery as a member of the viewing public. Vasquez had camped out since Sunday afternoon, bedding down in a sleeping bag on the pavement, with plenty of water, snacks and reading material to weather the long wait.

“It shows we care,” Vasquez said. “These are members of our community and we are here with them to help them fight for what they deserve.”

UC Irvine student Andre Castro, who also made the journey from California for the case, said he felt compelled to speak out for friends and roommates who were fearful, due to their immigration status, to speak up for themselves. “I don’t have that struggle, so I feel like it is my duty to be here,” said Castro, a military veteran and the child of an undocumented immigrant. “Undocumented students are an important part of our community and one of the least protected. We need to show them they have our support.”

After presenting oral arguments, lawyers representing UC and other plaintiffs expressed confidence they would prevail.

Lawyer Ted Olson, who together with Michael J. Mongan represented the plaintiffs in the case, said the administration had failed to provide a coherent rationale for ending the program. “They gave the excuse the program is unlawful, but that excuse makes no sense,” as no court had made that determination, Olson said.

By arguing that DACA was unlawful rather than providing an adequate rationale for terminating the policy, the administration was effectively inviting the courts to make the ultimate decision to end DACA.

“They did not want to be responsible or accountable to the people of this country for ending this program,” he said.

If the court agrees with UC and the other plaintiffs, that does not mean a new challenge to DACA could not be issued. Olson, however, said he did not believe the administration would pursue such a course.

“Why make such a harsh, cruel, mean decision, to take people who’ve got jobs, they’ve served in the armed forces, to rip them out of that and send them back to a country they don’t know and where they may not speak the language?” Olson said. “They don’t want to explain that to the American people.”

No matter the outcome of the case, UC officials have committed to making sure that the university remains a welcoming and safe environment for students, and to advocating for permanent legal protections for DACA recipients, including a path to citizenship.