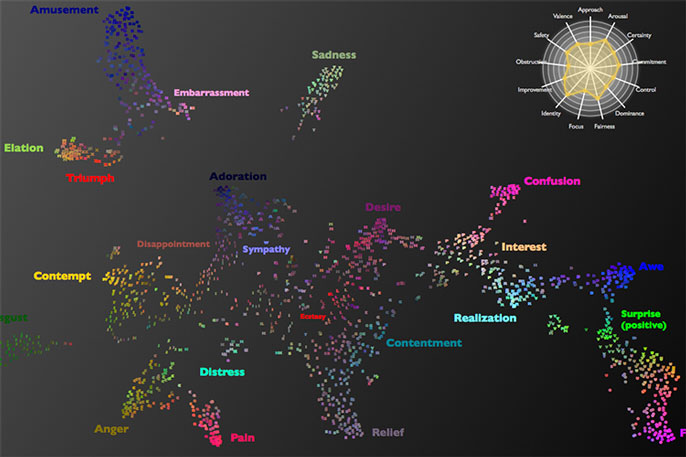 An overview of the Emotions Recognized in Vocal Bursts map.

Click the link to visit the online audio map, then move the cursor across the map to hear exclamations linked to 24 emotions. Note that the audio works more slowly on mobile devices.

Ooh, surprise! Those spontaneous sounds we make to express everything from elation (woohoo) to embarrassment (oops) say a lot more about what we’re feeling than previously understood, according to new UC Berkeley research.

Proving that a sigh is not just a sigh, scientists conducted a statistical analysis of listener responses to more than 2,000 nonverbal exclamations known as “vocal bursts” and found they convey at least 24 kinds of emotion. Previous studies of vocal bursts set the number of recognizable emotions closer to 13.

The results, recently published online in the American Psychologist journal, are demonstrated in vivid sound and color on the first-ever interactive audio map of nonverbal vocal communication.

“This study is the most extensive demonstration of our rich emotional vocal repertoire, involving brief signals of upwards of two dozen emotions as intriguing as awe, adoration, interest, sympathy and embarrassment,” said study senior author Dacher Keltner, a psychology professor at UC Berkeley and faculty director of the Greater Good Science Center, which helped support the research.

For millions of years, humans have used wordless vocalizations to communicate feelings that can be decoded in a matter of seconds, as this latest study demonstrates.

“Our findings show that the voice is a much more powerful tool for expressing emotion than previously assumed,” said study lead author Alan Cowen, a Ph.D. student in psychology at UC Berkeley.

On Cowen’s audio map, one can slide one’s cursor across the emotional topography and hover over fear (scream), then surprise (gasp), then awe (woah), realization (ohhh), interest (ah?) and finally confusion (huh?).

Among other applications, the map can be used to help teach voice-controlled digital assistants and other robotic devices to better recognize human emotions based on the sounds we make, he said.

As for clinical uses, the map could theoretically guide medical professionals and researchers working with people with dementia, autism and other emotional processing disorders to zero in on specific emotion-related deficits.

“It lays out the different vocal emotions that someone with a disorder might have difficulty understanding,” Cowen said. “For example, you might want to sample the sounds to see if the patient is recognizing nuanced differences between, say, awe and confusion.”

Though limited to U.S. responses, the study suggests humans are so keenly attuned to nonverbal signals — such as the bonding “coos” between parents and infants — that we can pick up on the subtle differences between surprise and alarm, or an amused laugh versus an embarrassed laugh.

For example, by placing the cursor in the embarrassment region of the map, you might find a vocalization that is recognized as a mix of amusement, embarrassment and positive surprise.

“A tour through amusement reveals the rich vocabulary of laughter and a spin through the sounds of adoration, sympathy, ecstasy and desire may tell you more about romantic life than you might expect,” said Keltner.

Researchers recorded more than 2,000 vocal bursts from 56 male and female professional actors and non-actors from the United States, India, Kenya and Singapore by asking them to respond to emotionally evocative scenarios.

Next, more than 1,000 adults recruited via Amazon’s Mechanical Turk online marketplace listened to the vocal bursts and evaluated them based on the emotions and meaning they conveyed and whether the tone was positive or negative, among several other characteristics.

For the second part of the study, researchers sought to present real-world contexts for the vocal bursts. They did this by sampling YouTube video clips that would evoke the 24 emotions established in the first part of the study, such as babies falling, puppies being hugged and spellbinding magic tricks.

This time, 88 adults of all ages judged the vocal bursts extracted from YouTube videos. Again, the researchers were able to categorize their responses into 24 shades of emotion. The full set of data were then organized into a semantic space onto an interactive map.

“These results show that emotional expressions color our social interactions with spirited declarations of our inner feelings that are difficult to fake, and that our friends, co-workers, and loved ones rely on to decipher our true commitments,” Cowen said.

In addition to Cowen and Keltner, co-authors of the study are Hillary Anger Elfenbein at Washington University in Missouri and Petri Laukka at Stockholm University in Sweden.

Click here for a link to the paper in American Psychologist.